“Tina’s paper clearly demonstrated that the dark rings seen on mussel shells are very much like tree rings in that one forms each year. Some of the mussel species found in the River Thames Some of the mussel species found in the River ThamesIsobel explains how in shallower (1.5m) regions of the river she stood in the water, decked in a dry suit, and carried out hand-sampling. Isobel holding Swan Mussel (Anodonta cygnea) Isobel holding Swan Mussel (Anodonta cygnea)So, what effect has the intervening half a century had on the mussel population and health of the river? Strikingly, Isobel found that mussel numbers had declined by almost 95%, with one species – the depressed river mussel – completely gone. The invasive Zebra Mussel (Dreissena polymorpha) The invasive Zebra Mussel (Dreissena polymorpha)“Regular monitoring, including of species we think are common and non-threatened, is needed to catch declines early. 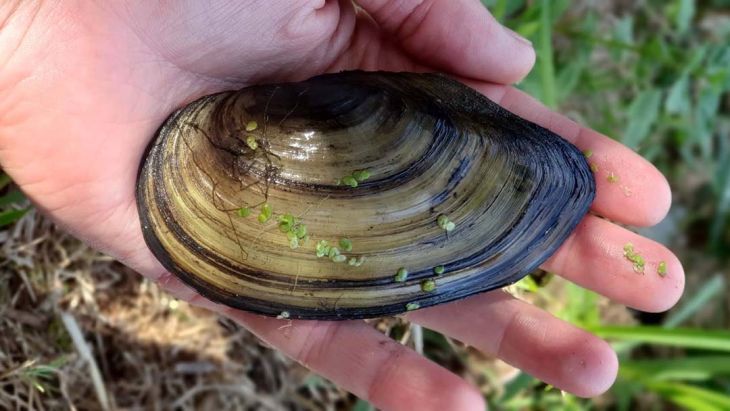 “It's brought a part of my life back that I never thought would be reawakened,”

says Christina (Tina) Negus, whose 1964 postgraduate research on mussels in a stretch of the River Thames near Reading has been replicated 55 years later by Cambridge Zoology PhD student, Isobel Ollard.

Unbeknown to Christina, who left academia shortly after her postgraduate degree at the University of Reading, her 1966 research paper has been widely cited in the decades since its publication and is seen as a seminal study in fresh-water mussel literature.

“To our knowledge it’s one of the earliest properly quantitative surveys of freshwater mussels anywhere,” says Isobel.

“Tina’s paper clearly demonstrated that the dark rings seen on mussel shells are very much like tree rings in that one forms each year. You can use these rings to measure growth rates.”

Christina recorded growth rates, biomass and productivity of the mussels as well as measuring the population densities of different species within different areas. Practically this meant spending hours at a time out on the river collecting mussels – using a net to dip while standing on the bank or a grabbing device to collect samples while leaning over the side of a boat (borrowed from the nearby university sailing club). Christina even enlisted the help of the local Thames conservancy to help with river transects – a method used to measure the density of plants and animals.

“Mussels are a great indicator of the health of the river ecosystem,” says Isobel. “We thought it would be interesting to go back and see what’s changed at the site.”

To aid the replication of the study, Isobel got in touch with Christina with the help of Reading University, where Christina had studied as a postgraduate. “I was surprised and delighted,” says Christina on hearing that Isobel would be carrying out follow-up research.

Both scientists share a love of the natural world and a passion for on-the-ground research.

“I was an outdoor person,” says Christina, “all my interests were to do with wildlife and landscapes. So getting wet and dirty in the river wasn’t a problem!”

For Isobel it was a visit to a Field Study Centre in Devon that cemented her interest in zoology. “I realised how much there was to learn just by looking at things and observing a species' behaviour outdoors.”

On comparing notes, it became clear that the stretch of the River Thames where both women spent many hours surveying has changed dramatically. Christina recalls the isolation of the rural setting, often seeing nobody all day except the occasional fisherman.

“It’s definitely not out in the sticks anymore,” says Isobel. Today the area is built-up and urban. Isobel explains how dog-walkers on the footpath running along the river would ask strings of questions: “What are you looking for, what are you going to do with the mussels, can you eat them?”

More seriously, Christina describes the two-year-sore-throat she developed while carrying out her fieldwork in the 1960s – which she now suspects was caused by polluted water. Since then, legislation has meant the river has been cleaned up, so Isobel didn’t face the same risk to her health.

Some of the mussel species found in the River Thames

Some of the mussel species found in the River Thames

Isobel explains how in shallower (1.5m) regions of the river she stood in the water, decked in a dry suit, and carried out hand-sampling. This involved placing a 1m square quadrat on the riverbed and then manually feeling for mussels within the area of the wire frame.

“You quickly get used to the size, shape and feel of the mussels you’re looking for, although it’s easy to get taken in by rocks and you do end up pulling out the odd beer can – or worse – as well!“

“To sample the deeper parts of the river we used dredging from a boat,” says Isobel. She describes how a dredge was attached to a long rope which she held over the side of the boat and lowered into the sediment. The boat driver then drove upriver, pulling the dredge along, filling it with sediment. At the end of each stretch the dredge was raised and Isobel searched through the contents for mussels.

So, what effect has the intervening half a century had on the mussel population and health of the river?

Strikingly, Isobel found that mussel numbers had declined by almost 95%, with one species – the depressed river mussel – completely gone. The results have been published today in the Journal of Animal Ecology, the same journal that carried Christina’s original study.

“This is a serious decline and is likely to have knock-on effects. These results are an important warning about the health of our mussel populations, and wider river ecosystems.”

Isobel explains that because mussels are filter feeders – an adult mussel is able to filter up to 40L of water a day – this can help to prevent the build-up of harmful algal blooms. Mussels also support other riverbed species and their presence is associated with higher riverbed biodiversity.

“Regular monitoring, including of species we think are common and non-threatened, is needed to catch declines early. By identifying where declines are happening and which species are affected, we can build a better picture of what the causes might be, as well as target conservation actions.

“We also need stronger protections for freshwater ecosystems, to protect the health not just of mussels but all the other unique species which inhabit them.”

Isobel explains that speaking to Christina was invaluable to carrying out her research on a practical level, but it’s also added a personal dimension to the project. “It’s been lovely to have this sense of building on other people's research.”

And what advice does Christina have for Isobel? “Stay interested and stay fascinated, whatever you end up doing.”

The text in this work is licensed under a Creative Commons Attribution 4.0 International License 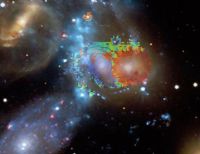 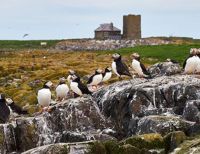 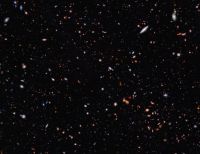 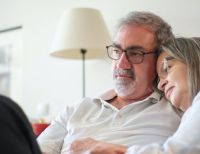 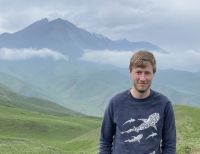 The tulip hunter of Toktogul