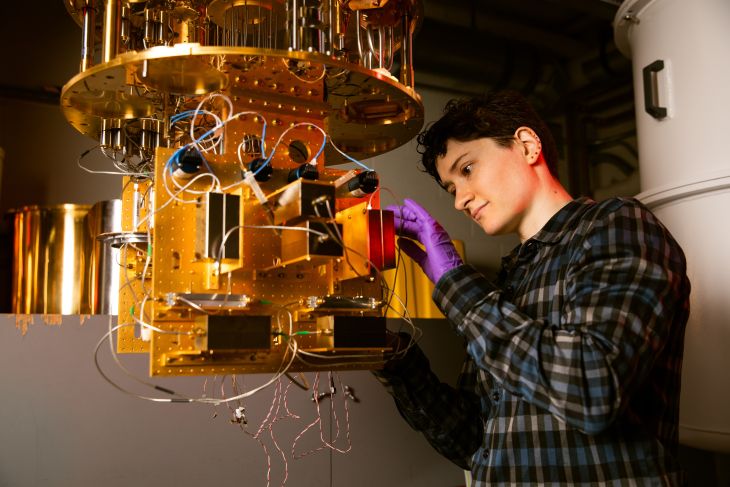 In Building 13 on MIT’s campus, there sits a half-a-million-dollar piece of equipment that looks like a long stretched-out chandelier, with a series of gold discs connected by thin silver pipes. The equipment, known as a dilution refrigerator, is a key player in PhD student Alex Greene’s research, as it houses all their experiments. “My life gets shaped around its rhythms,” they say.

The first time Greene helped put new samples in the fridge, they were working with a postdoc at midnight on a Friday, blasting Danish screamo music. Ever since, the fridge has led them on both exciting and frustrating adventures throughout their PhD research on reducing errors in quantum computing systems.

Greene grew up in northern New Jersey with their identical twin, Jamie. The two were extremely competitive as children, and outside of school, they stayed busy through running, pole vaulting, and rock climbing. Their dad is a neurologist and their mom is a former electrical engineer who worked at Bell Labs, a research lab known for pioneering key technology for computers and phones.

In 2010, Alex and Jamie both came to MIT as undergraduates. Alex had been interested in biomedical engineering during high school, “But then I discovered that I hate working in ‘wet’ labs,” where scientists handle chemicals and biological materials, they say. Another influence was Carl Sagan’s “Contact,” a science fiction book about an astronomer searching for extraterrestrial intelligence. “It got me hooked on physics,” Greene says.

As an MIT undergraduate, Greene double-majored in physics and in electrical engineering and computer science. They found a home in the field of quantum computing, where researchers are working to build extremely powerful computers by leveraging physics concepts in quantum mechanics.

After completing their master’s, they pivoted to a different technology called superconducting quantum computing. Instead of suspended atoms, this technology uses tiny electric circuits that are exceptional at carrying electric current. To control these circuits, researchers only need to send electric signals.

For this project, Greene wanted to work with MIT Professor William Oliver, who directs the Center for Quantum Engineering in the Research Laboratory of Electronics. Once again, Greene chose to stay at the Institute — this time to pursue their PhD.

Someday, quantum computers might solve problems beyond the reach of normal classical computers, enabling immense progress in many applications. However, manipulating hardware so it exhibits quantum behavior is challenging from a technological perspective. Currently, quantum computers, including superconducting ones, struggle with high error rates that limit the length and complexity of the “programs” they can run. Most experimental research in quantum computing is focused on addressing those errors.

Greene is working to make superconducting quantum computers more accurate by reducing the impact of these errors. To test their ideas, they need to run experiments on superconducting circuits. But for these circuits to work, they need to be cooled down to extremely low temperatures, around -273.13 degrees Celsius — within 0.02 degrees away from the coldest possible temperature in the universe.

This is where the chandelier-like dilution fridge comes into play. The fridge can easily reach the required cold temperatures. But sometimes it misbehaves, sending Greene on side quests to fix its problems.

Greene’s most arduous side quest involved chasing down a leak in one of the fridge’s pipes. The pipes carry an expensive and rare gas mixture used to cool the fridge, which Greene couldn’t afford to lose. Fortunately, even with the leak, the fridge was designed to remain functional without losing any mixture for around two weeks at a time. But, to keep the fridge in service, Greene had to constantly restart and clean it over a five-day process. After roughly seven stressful months, Greene and their lab mate finally located and fixed the leak, allowing Greene to resume their research at full speed.

Outside of research, Greene is constantly engaged in a whirlwind of activities, adding new hobbies while painstakingly removing old ones to make room in their busy schedule. Over the years, their hobbies have included glassblowing, singing in a local queer choir, and competitive rock climbing. Currently, they spend their weekends working on home improvement projects with their partner at their rainbow-colored co-op.

For the past year and a half, Greene has also been involved with water sanitation projects through classes with MIT D-Lab, a project-based program that works with low-income communities around the world. Taking classes in D-Lab was “something that I always wanted to do from undergrad but I never had time for it,” they say. They were finally able to fit D-Lab into their schedule by using the classes to help fulfill their PhD requirements.

For one project, they’re developing a system to effectively and cheaply filter out harmful excess fluoride from water supplies in Pakistan. “It’s unintuitive that fluoride is bad because we have fluoride in our toothpaste,” they say. “But actually, too much fluoride changes the hardness of your teeth and bones.” One idea that they and their collaborators are exploring is to build a water filtration system using clay, an established yet cheap fluoride removal method.

A visiting assistant professor from Pakistan, who was participating in the D-Lab class, had originally pitched the fluoride filtration project. When the class ended, the professor returned to Pakistan but still kept the project going. Greene is now working virtually with the professor to help figure out the best type of clay for filtering out fluoride. Through their experiences with D-Lab, Greene sees themselves continuing to volunteer on water sanitation projects in the long term.

Greene plans to finish their PhD this December. After 12 years at MIT, Greene aims to leave the Institute to work at a quantum computing company. “It’s a really great time to be in the field” in industry, they say. “Companies are starting to scale up [quantum computing] technology.” 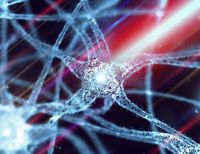 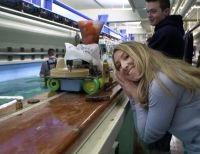 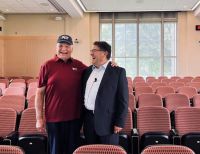 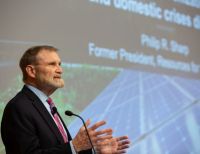 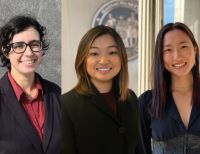